TL;DR: On the day insect products are as cheap as alternative protein sources, this would be our new favorite and go-to snack. 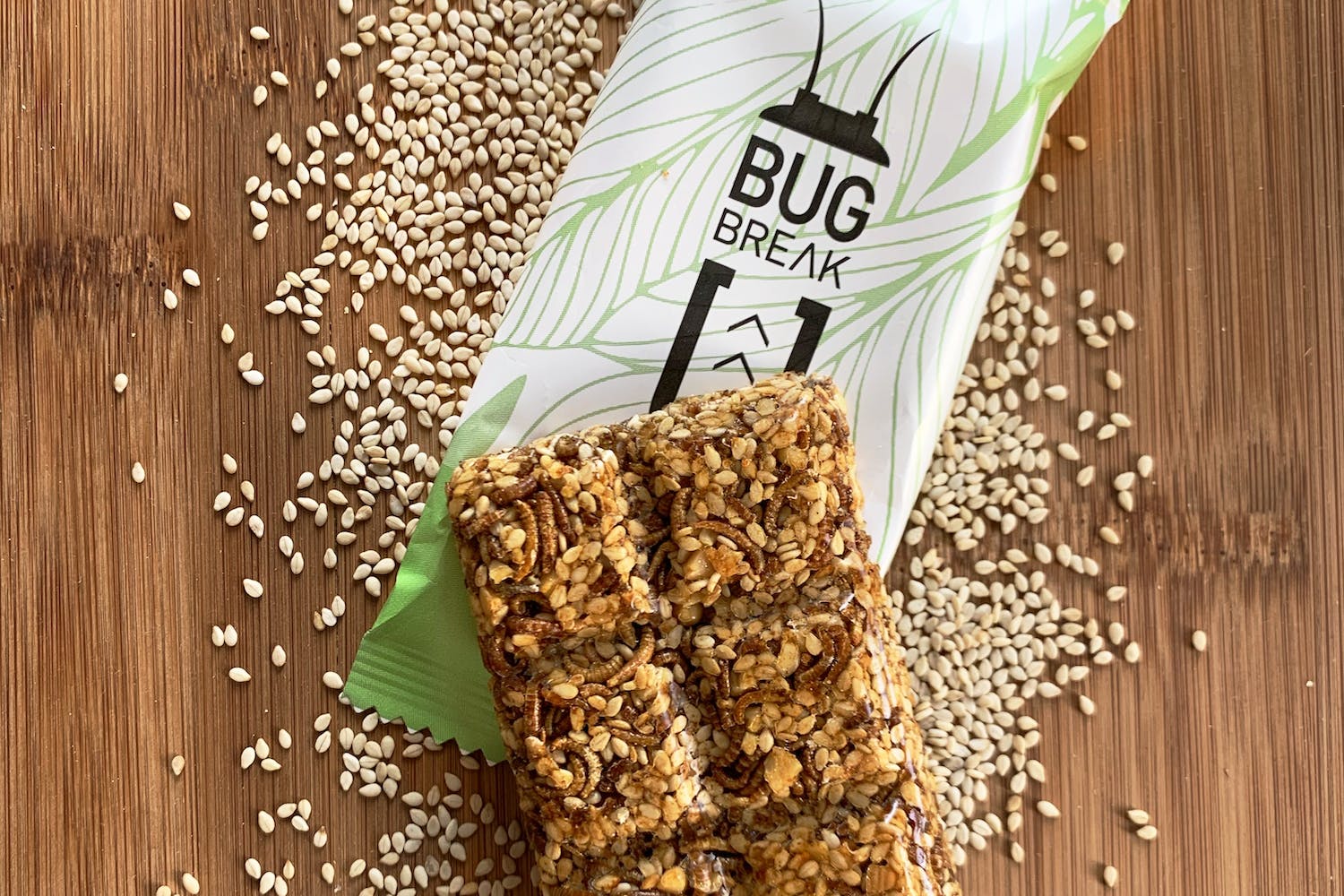 The Bug-Break bar is as most foods and snacks containing insects absolutely overloaded with it: 10%. The biggest taste contributors, however, lie in the fact that 38% of the bar is sesame and 12% almonds. In case you are good in math and wonder, what the other 40% of the ingredients are: isomaltulose (what?).

We did a little research into isomaltulose and if you're interested you can find more detailed information about it in the next section. If you don't, no worries, just skip the section and continue with the review. Long story short for the not so interested reader: isomaltulose is a novel food and an alternative for sugar with some more added benefits.

The bar is marketed as an energy bar, and with the main ingredient being isomaltulose 32% of the calories you get are carbs indeed. The buffalo worms add some good old protein in the mix providing 12% of protein per bar. Which leaves us with about 56% of this bar actually being fat from the almonds and sesame. The isomaltulose definitely gives an energy boost, but looking at the very balanced caloric values of this bar we consider it not just an energy bar for your quick energy fix.

Having said that, the balanced nature of this bar makes it a perfect snack that fills you up, provides you with healthy protein and fat, and also gives you an energy boost over a long period of time!

Isomalutlose, also known as Palatinose, is a natural occurring disaccharide that is made up of glucose and fructose linked through a different bonding structure. On industrial scale, it is also produced from sucrose (beet sugar) by enzymatic rearrangement [1]. Although still considered a "Novel food" in Europe [2], it has been used since 1985 as a sugar and "regular food" in Japan already. Sucrose is the sugar we all know and probably all eat way too much of. Considering isomaltulose as an alternative sugar, it has the same relative sweetness (40%) and therefore the same sweet taste.

However, compared to regular sugar it has one big plus: its glycemic index (GI) of 32 is low. GI is a measure that indicates how much the blood glucose levels in our bodies rise after the digestion of particular foods. A high GI creates peaks of blood glucose making you feel like you're on drugs for about 10 minutes after which you hit the low for about an hour and feel like you can go straight to bed if you don't maintain those glucose levels.

Most sugars, thus, give you a short peak of energy - as in many cases they also intend to do. The chemical bond formed between glucose and fructose in isomaltulose is so strong that the human body cannot break it down easily and therefore digests it slowly, giving the low GI [3]. The slow digestion and breakdown means that glucose is released slowly and more in portions over time so that you don't get a peak but rather increased levels of blood glucose for a longer time.

Especially for endurance athletes, this slow release of glucose can be beneficial as it provides a more sustained source of energy over time. And also pretty cool: isomaltulose is tooth-friendly and not laxative, so keep those blood glucose levels maintained throughout the day without spending half the day on the toilet with this sugar alternative!

One of the things about Bug-Break we were most curious about and what you can see on the website is that the buffalo worms are very obviously placed on the energy bar. Where most insect bars these days use a powderized version of insects and mix it in with the other ingredients so you don't see any insect, Bug-Break uses whole buffalo worms.

And hurray, we were not disappointed. You don't even need to look closely to spot them, they are all over the place! Some even fell loose right out of the pack and straight into Tom's mouth. Big thumbs up for Bug-Break, as we believe this to be an important step to acceptance as well: associating seeing insects with the nice taste the bar (and the buffalo worms alone) has.

The Bug-Break bar does not only look different than other bars, it also tastes different - in a good way. It looks tasty, crunchy, has a bit of a glassy layer all holding the bar together and invites you to take a bite.

Even more important: this is exactly how it tastes too. The bar is crunchy, hits the sweet spot (ha-ha) when it comes to sweetness, and also has a strong nutty taste from the worms and almonds. Especially if you like sesame you're gonna love this power booster! More than one-third of the bar is actually sesame and that is also clearly what you taste.

Overall, we love this product and recommend it to everyone with deep pockets (because unfortunately it is quite expensive for an everyday snack). Definitely worth a try! 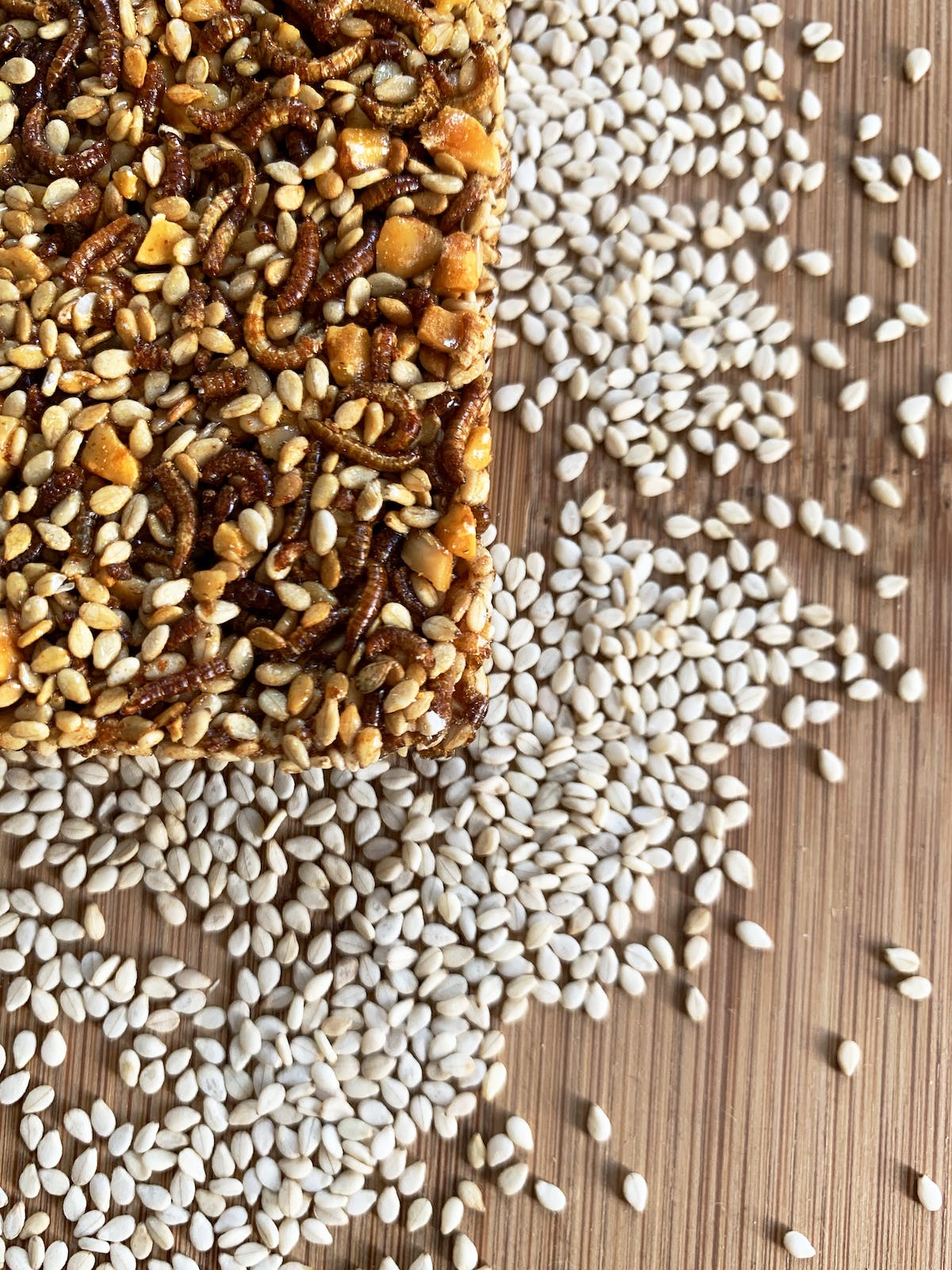 Here you can see your little crunchy friends