On the Menu: Grasshoppers

TL;DR: Ancient, Hulk, superfood, lifesaver and sometimes a plague: the grasshopper is an animal of many trades.

Can you spot the difference between a grasshopper and a cricket?

Can you spot the difference? Even thought the two are very often mixed up, the difference between the two is actually quite obvious. Both do indeed have those huge back legs, but that's also where the visual similarities end. Grasshoppers are in general much bigger than crickets, and on a photo the two can easily be distinguished by the length of the antennae. Crickets have long antennae that are almost as long as the cricket itself, while the antennae of grasshoppers are short [6]. Another important, but non-visual, difference between the two is that grasshoppers can be a real plague (more on that in point 3) while crickets never turn into a plague.

2. This ancient animal survived the dinosaurs

Not many animals survived the mass extinction event that happened about 66 million years ago that made the dinosaurs go extinct. The most well-known survivors are probably crocodiles and sharks [1], but did you for example also know that cockroaches (seems like getting rid of them has been a problem for millions of years by now...) and grasshoppers survived the event? The grasshoppers (or crickets, who knows) we know today descend from ancestors that roamed the earth even way before dinosaurs did. The first fossil records showing primitive grasshoppers date back to the Carboniforous period, which was about 300 million years ago.

3. Stronger but not better together

Alone or in small groups, grasshoppers won't do any harm. But chances are you've heard something about the many swarms terrorizing especially East Africa and the Middle East this year [8]. When this happens on the scale it did this year, and several countries are hit by swarms of locusts, it is called a plague. Swarms form when the numbers of grasshoppers increase and they are crowding: they change their behaviour from a rather solitary lifestyle to a so-called gregarious lifestyle (becoming a social animal preferring groups). And because they not only change their behaviour but also their morphology, we have given a swarming grasshopper even a different name: locust [5]. Locusts can multiply 20-fold within a timespan of only three months (a little too gregarious perhaps?). Swarms can grow up to 70 billion (!!) insects a piece and destroy 130 million kilograms of vegetation and crops a day, leaving no food for the local communities [9]. 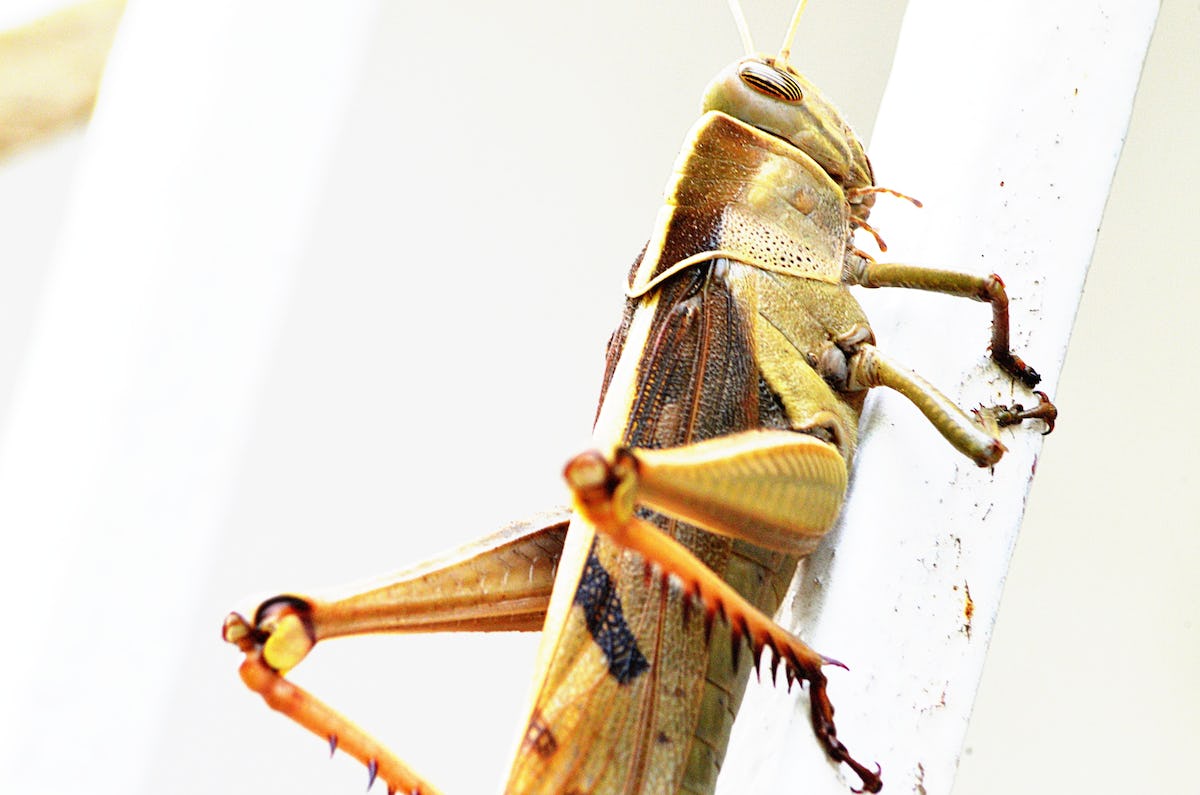 Relatively speaking, grasshoppers can jump far as fuck. If we were able to jump exactly as grasshoppers do, and jump the distance relative to our size, we would be capable of jumping from one side of a football field to the other - so a grasshopper is basically the insect version of the Hulk [2]. They catapult themselves into the air using their big back legs that are wound up like a spring. On relaxation of the muscles around the knee and in the legs, this spring is activated and the energy is released into a serious catapulting jump. And we often forget it because of their jumping, but grasshoppers also have wings and are pretty strong fliers.

5. Cyborg grasshoppers can save lives

Insects, grasshoppers included, have olfactory receptor neurons in their antennae that can detect chemical odors in the air. These neurons send electrical signals to the antennal lobe of the grasshoppers to give them the sense of smell. Each antenna has roughly 50.000 of these neurons. To test the bomb-sniffing ability of grasshoppers, researchers implanted electrodes in this antennal lobe and analysed the electrical signals in the brain to try and recognize the neuron activation representing explosive vapours. The researchers managed to recognize the target chemical in the brain activation within only a few hundred milliseconds after exposure [7]. Success! Well, not fully. Even though the researchers were able to successfully detect explosives, the grasshoppers had to carry a tiny lightweight sensor backpack that would record and transmit the neuron activation. The backpack, however, was too much to handle for the grasshoppers and immobilized them, resulting in the grasshoppers becoming tired and dying after about seven hours.

Packed with protein (~60 grams per 100), this superbug has been consumed by humans for centuries for primarily two reasons: their taste and nutritional power. The Old Testament, for example, even encouraged to eat locusts, beetles and grasshoppers, and mentions that John the Baptist survived the desert living on grasshoppers and honey [4]. Remember that plague we just mentioned? For a long time, these swarming locusts were also harvested and eaten by the communities that lived in the areas terrorized by them [5]. This was for example done in parts of Africa, the Middle East and North America. Unfortunately (whether this is unfortunate is debatable), swarming locuts should not be consumed anymore because we use pesticides to kill them and fight such plagues, which might result in traces of pesticide when consumed.