Up for eating insects?

TL;DR: Entomophagy is practiced worldwide but still a taboo in Western cultures. 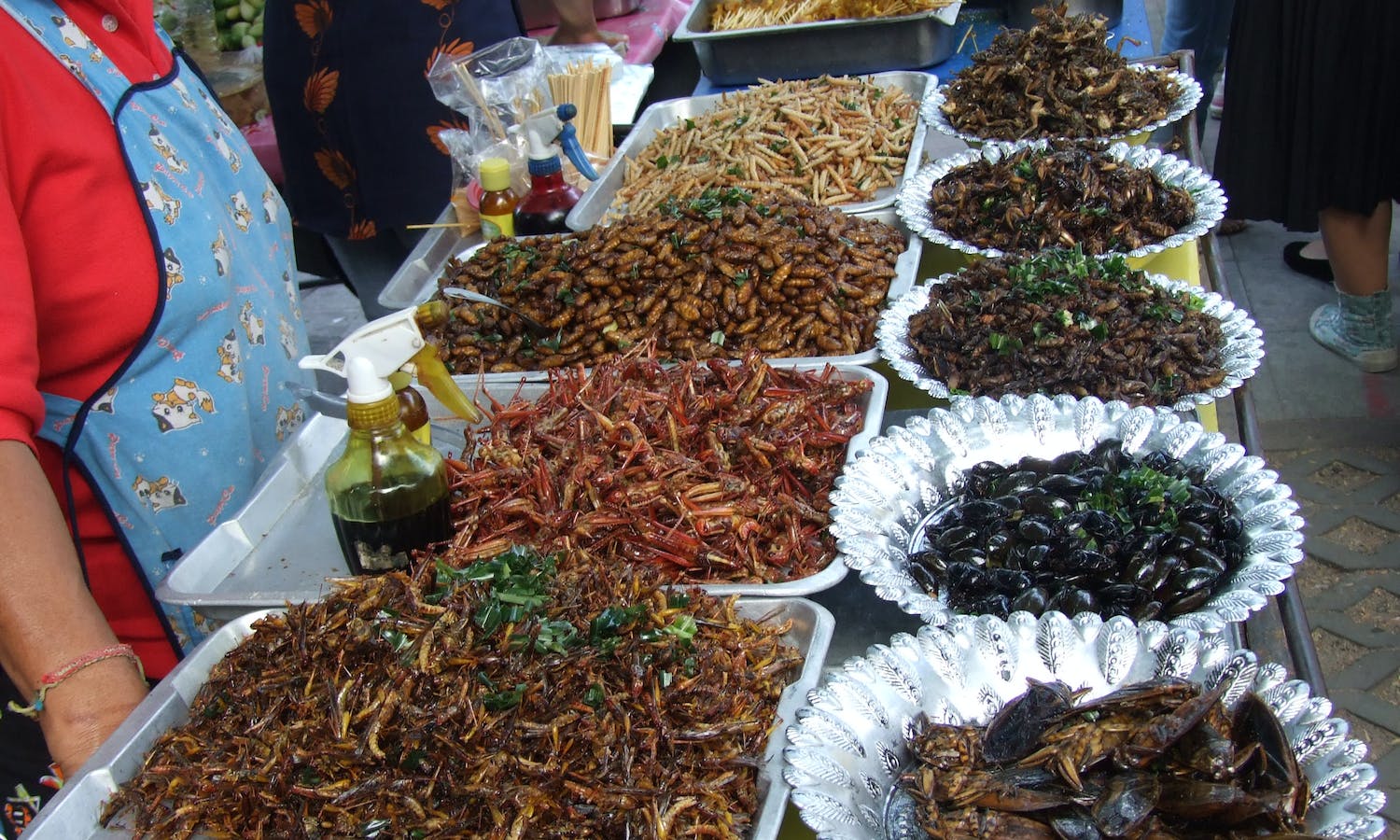 Thailand is well-known for its many market stalls selling a wide variety of insects.

It might just be the next big trend in the food industry or dietary hype on social media after buzzwords like Vegan, Paleo, Keto and Intermittent Fasting: "Ento". Since the Food and Agricultural Organization of the United Nations (FAO) released a report in 2013 [1] interest in edible insects has started to grow in Western cultures too. The report declares the need to look for alternative protein sources to support a sustainable future and advocates insects to achieve this.

Eating insects, however, is nothing new and dates back ages in human society and is also seen in many - if not most - modern-day cultures. It is estimated that around 2 billion people across Africa, Asia, Central and South America, and Australia consume a wide variety of around 1900 edible insects and practice Entomophagy [2].

But why is it that entomophagy (stemming from the Greek éntomon meaning 'insect' and phagein meaning 'to eat') has never really been accepted in Western culture?

The history of eating insects dates back centuries and started back in the days of the hunters and gatherers already. Insects were available almost everywhere and might have just been the easiest food source to collect next to edible plants. Also, insects are eaten by other animals all the time, so why wouldn't we try them too - might be yummy right?

First historical sightings of entomophagy is most likely found on cave paintings in Altamira in North Spain dating back somewhere between 30.000 and 9.000BC (can they not do a better job estimating this?). The paintings show the collection of edible insects and wild bee nests hinting towards the fact these were common food sources back then. The first written reference originates from the ancient Roman and Greek period, as the famous Aristotle wrote how cicadas can best be harvested and eaten and that they were a true delicacy back then (see Quote).

Furthermore, the naturalist and scholar Pliny the Elder wrote that Roman aristocrats feasted on cossus (larvae of the longhorn beetle) raised on flour and wine [1, 3]. Other references to edible insects go back to ancient China where they used insects for their medicinal benefits, Algerians Ethiopians eating locusts and grasshoppers, and the Australian Aborigines making meals of moths and witchety grubs (their larvae). Sidenote: cooked witchety grubs supposedly taste like roasted almonds, isn't that a treat?!

Aristotle: "The larva of the cicada on attaining full size in the ground becomes a nymph; then it tastes best, before the husk is broken. At first the males are better to eat, but after copulation the females, which are then full of white eggs."

Today, actually most cultures around the world eat insects, and the highest consumption of these can be found in Africa, Asia and Latin America [4]. African cultures commonly enjoy crickets and grasshoppers, but also smaller bugs like termites and caterpillars. The Asian culture is probably the best known for its plentiful and colourful adoption of edible insects into many different dishes. All around Asia, and especially in the Southern-east parts, a wide variety of insects such as crickets, dragonflies, beetles and moth larvae are consumed in several ways.

Larvae of any kind are mostly added to soups, stews or a typical Asian stir-fry. Well-known for deep-fried snacks such as grasshoppers, crickets, bee larvae, termites and more are the traditional markets in Thailand selling these to hungry tourists as a tourist attraction. Finally, de-winged dragonflies that are boiled in cocunut milk are considered a delicacy that Bali is well-known for. When you hit our recipes page, you will see some tasty ideas how you can bring this asian culture into your kitchen.

In Latin America, and Mexico especially, the same report from the FAO mentions that there is the greatest variety of edible insect species eaten: over 500! Typical Mexican delicacies include chapuline and escamoles. Chapuline, a type of grasshopper, is of cultural culinary importance for a long time and can often be found seasoned with lime and chile in a Chapuline Taco [3]. Escamoles, which are ant eggs, are a true delicacy and have a creamy and nutty taste. They are sometimes even referred to as Mexican caviar.

Finally, another exquisite beetle is the agave worm which is often used in tequila and mezcal bottles. These worms will be preserved in alcohol of good quality and are therefore used as a symbol of the quality of these liquors. Eating insects is so deeply rooted into the Mexican culture that there are even parts in Mexico where certain species are used too much causing their populations to decrease [5]. Increased consumption is due to the growing human population in the area and the increasing demand of restaurants in and outside of the area. A little further down south in certains parts of South America they have made popcorn-like snacks that is served in movie theaters out of toasted leafcutter ants.

All in all, the insects that are globally the most consumed are the ones that are the easiest available (duh!). Globally that leads to the following numbers [1]:

Regardless of the practice of entomophagy in many cultures worldwide and the recent growing interest in it, Western adoption is lagging. Eating insects has developed throughout Western history as a cultural taboo [7] and is considered gross. This taboo has its roots most likely already from when Western cultures started farming and raising animals and livestocks as a source of food. As we got better and better at these, insects more and more got the picture of being primitive food because it was lower in the food chain.

This is immediately where things start to get blurry: many animals that we eat are also entomophagists. But even though we find it gross and primitive to eat insects, we are perfectly fine with eating animals that in their turn have eaten these insects. The disgust against edibe insects grew deeper and deeper in the colonial era of Europe. As Europeans explored the world, they came in touch with other cultures that did eat insects. Christoper Columbus, for one, used their entomophagy to describe the primitiveness and savagery of these people that would not too much later be enslaved and traded [8].

Of course this is not the only reason for the current taboo but it further deepened Western opinion about entomophagy. Since then, these ideas have persisted as they are part of nurture in Europe and America. Since the FAO report from 2013 mentioned earlier, however, there seems to more and more interest in the world of edible insects that might also lead to higher adoption in Western culture.

Simply removing the taboo is not going to globalize the edible insect industry though. Although insect farming is practiced in many areas of the world already, there are still several questions that need to be addressed if entomophagy is to be practiced on a global scale at some point in the future. Insect farming, for example, has been a sensitive topic for a while in Europe as it fell in a so-called legal gap that was only recently filled in 2015 [8].

It then was made clear and legal that insects fall within the scope of the Novel Food Regulation, and since 2018 are thereby considered part of the list of authorized novel foods. Because of this, the number of professional insect farms has since then been on the rise but is definitely not high yet. Aside from regulations, more research is also required into sustainability, efficiency, which species are best suited, food safety and more when it comes to large scale insect farming [6].